Transferring non-linear audio and video when working with sound for picture is accomplished by the use of OMF or AAF files. So what are they, how are they created and how do you work with them in Pro Tools?

An OMF (Open Media Framework Interchange), which is also sometimes known as an OMFI, was developed by Avid in order that metadata and media data could be shared between both Mac OS and Windows; and different applications.

The AAF (Advanced Authoring Format) is a newer, open standard created in 2000 by a consortium of broadcasters and developers called the AAF Association (renamed in 2007, the Advanced Media Workflow Association). An AAF also enables metadata and media data to be shared across platforms and between different applications.

When creating either OMF or AAF files, the media can be embedded or externally referenced. Data that is included but not supported by the receiving application (e.g. Pro Tools) will be ignored. This typically includes effects added by other systems.

When exporting an OMF or AAF file with embedded media, the result is one large file containing both the metadata and all associated media files. Embedding media into a single file provides a convenient means to transferring data between systems, but it is important to note that a single OMF or AAF can be larger than 2GB only if no one individual media file contained within is larger than 2GB. 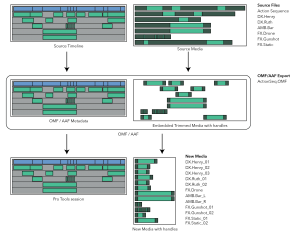 When working with OMF or AAF files with externally referenced media you need to make sure that you transfer not only the OMF or AAF file, but also the corresponding folder of media. The OMF or AAF in this case will only include the metadata, but no media. It can be very useful to reference the media rather than embed it so as not to duplicate media unnecessarily, especially in a shared storage environment such as a post house. 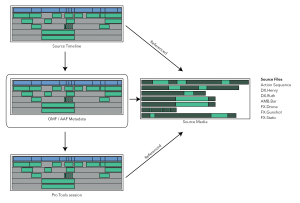 Working with a Video Editor

When you are working on sound for picture it is likely that you will also have many new versions of the edit sent over as changes are made by the director. It is therefore good practice to make sure that the material that is sent over follows some “house rules” so that everything runs as smoothly as possible.

Firstly their timeline should be set to 48 kHz / 24-bit audio to maintain the highest quality and dynamic range from their project.

Next is maintaining sync. By default the video timeline starts with a timecode of 00:00:00:00 (hours, minutes, seconds, frames). However, as a means of making sure that the data that is transferred appears in the correct place, it is normal to add additional clips for sync. It is standard that when editing film, the start of the video starts at 01:00:00:00 and if editing a television show 10:00:00:00. I will concentrate on working on film here, but feel free to adjust the timecode accordingly for television. 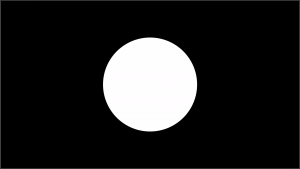 When referring to the start of the video, we refer to the First Frame of Action (FFOA), with the end of the film being the Last Frame of Action (LFOA). Exactly 2 seconds before the FFOA and 2 seconds after the LFOA there should be a ‘2 pop’. This consists of a punch in the video lasting exactly 1 frame; and a 1kHz, -20dB sinewave also lasting exactly 1 frame in every single audio track. The punch can be created easily as a white circle in the centre of a black frame. So in the case of film, this would occur at 00:59:58:00 which is 2 seconds before the FFOA at 01:00:00:00. 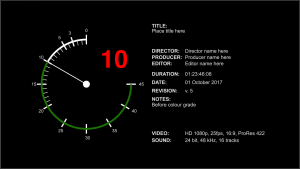 Leading into the first ‘2 pop’ is a countdown clock, ideally with information on the project being transferred. This should last between 10 – 45 seconds, to give enough time to read any associated information and have a visual line up of where the ‘2 pop’ will be. When this reaches 3 seconds to go, this will go black for 1 second. 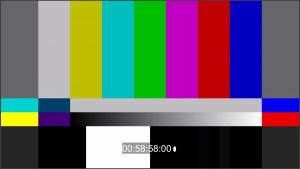 It is also customary to have Bars and Tone prior to the countdown clock in order to provide reference for both colour and audio level.

Placed over the top of all of this (and crucial for any future changes in the edit) will be burnt-in timecode.

In order to speed up the process of editing and mixing the sound in Pro Tools, it is also important to convey to the video editor that a well laid out timeline can save a lot of time. Making sure that the tracks are named and audio clips are on the correct track. A track list is also often sent along with any additional notes.

The video editor will then provide an exported video reference file containing all of these elements and their current sound mix, along with the exported OMF or AAF file (and related media if necessary). 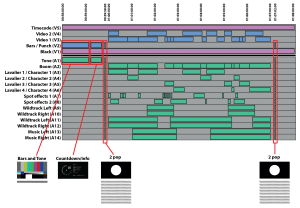 It is worth noting that an OMF or AAF that contains embedded video are not supported by Pro Tools and cannot be imported. 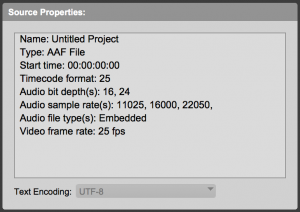 The Source Properties section displays information about the format of the data to be imported into the session including:

The Audio Media Options tell Pro Tools what to do with the source media when importing an OMF, AAF or Pro Tools session.

The Video Media Options tell Pro Tools what to do with any related video material referenced by the OMF, AAF or Pro Tools session.

Pro Tools allows you to map the timecode of the imported tracks to the current session.

In addition to the Timecode Mapping Options you can offset the incoming tracks with the Track Offset Options, which allows you to adjust for different timescales (Bars|Beats, Minutes:Seconds, Timecode, Feet+Frames or Samples).

When importing an OMF, AAF or Pro Tools session you have the option to map the imported tracks to New Tracks or to existing tracks within your session. It is important to note the following options available

Once all of the options have been chosen you are ready to import into Pro Tools to start working on the sound. 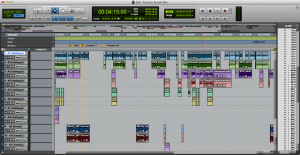 It is a good idea now to duplicate these tracks and then choose Hide and Make Inactive, so that you have the original material to go back to if you need to.

Key to making sure that you work efficiently with OMF and AAF files is communication with the rest of the team on that project. Setting out what you require from them and how a project will be delivered will help to speed up the process. Naming of tracks and organization of media on the source side will also aid in this.