In this tutorial we will be looking at the ‘Vocal Rider’ plug-in released by the audio plug-in giants Waves. The principle of the plug-in is that it will automatically, after a little tweaking, ride the fader of your vocal tracks to help them sit more comfortably within your mixes The plug-in also works in real time, so there is no need to waste time scanning your recordings prior to mixing.

We know what you’re thinking…isn’t that similar to what a compressor does, well let’s look at the differences first…

Before we get started on the plug-in, it is important for you to understand that there is quite a difference between changing the volume level of a vocal track and applying a compressor.

A compressor reduces the level of an audio signal by a preset value once a predefined ‘thresold’ level is met. Furthermore, compressors feature time-based settings such as attack and release time, as well a variable ratio. These add sonic qualites to the audio they are processing, while this can benefit the vocals within a mix, the voice is such a dynamic instrument that compressors can sometimes overdo it and ruin a perfectly good recording if not set up correctly throughout.

It is therefore arguably better to control the dynamics of a vocal recording by adjusting the volume fader, and then applying a compressor afterwards to polish the small dynamic variations which need attention. You can gain a better understanding of how compression works by reading our basic compression guide here.

Now that we have cleared up those differences, let’s get stuck in with the plug-in and using it within Pro Tools. 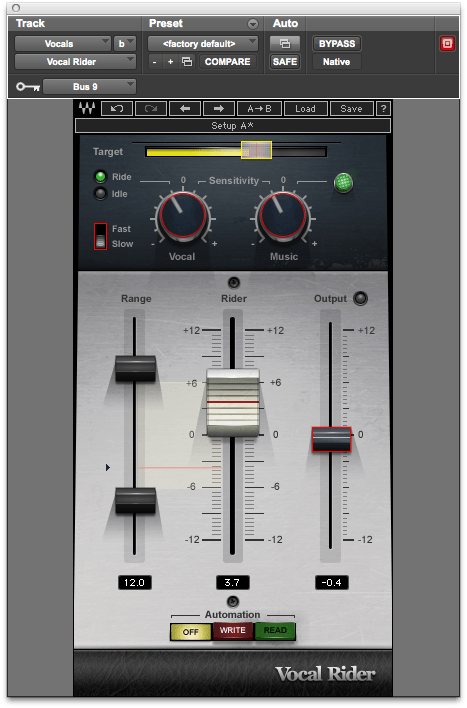 Whilst the capabilities of the plug-in are very powerful, the interface is nice and clean meaning that you won’t have to waste valuable production time trying to find your way around it.

You will notice that the top of the plug-in follows the rest of the Waves range including features such as a preset function and an A/B comparison to test between settings or to have separate settings for your verse and chorus for example.

Now let’s take a look at all of the settings you will be adjusting to create a professionally levelled vocal track with ease.

The target fader at the very top of the plug-in is the rough level you would like the vocals to sit within the mix. The yellow bar behind the small fader will show you the real time level of the signal entering the plug-in. The principal being that when the level is less than the set target the fader will be brought up, and when the signal is higher than the target level, the fader will duck down. You will most likely set this value first of all to start shaping the level, although you will find yourself coming back to tweak it again after you have adjusted the other settings.

You will next notice two small LED’s which show whether the the fader is currently adjusting your signal, or whether it is idle and waiting for a sufficient enough dynamic change. This is a useful indicator as it can help to  ensure that the plug-in is only responding to the vocals in particular while ignoring any music or noise spill that may feature in the recording. This will become clearer after we discuss the sensitivity knobs next.

The first of the two sensitivity controls is ‘vocal’, you can think of this is a sort of threshold for the plug-in to determine the difference between the vocal and any spill that may be apparent on the recording. This is where the ride and idle lights we just discussed become useful to monitor what the plug-in is seeing as pure vocal sound. Waves have built-in a breath detection system so you needn’t worry too much about listening out for that kind of spillage.

Before we look at the ‘music’ sensitivity control, we must first explain that the plug-in features a sidechain input into which you can route all of the music within your session (excluding the vocals of course) so that it can make vocal level changes dependent on the level of the music going on around it, cool huh?

If you are unsure of setting up a sidechain we have a tutorial here, all you will need to send are the other music elements to a specific bus and then set that bus as the key input at the top of the vocal rider.

Once you have set up the sidechain, the ‘music’ sensitivity control can come in to play. This knob determines how much level variation is considered should the music get louder in a different section. The strength of the green LED to the right of it will show how much it considers the music level to be changing.

This small switch determines the attack time of the fader adjustments, despite there only being two speed variations and no customisation facility, the settings have been anticipated to work for vocals and respond well depending on the genre of music you are working with. Fast moving hi-hop vocals will benefit from a fast attack, whilst a ballad vocal may sound more natural with a slower fader movement.

The range controls will allow you to set boundaries for the fader to move within. Whilst the plug-in is designed to automatically respond to level variations, on some occasions there could be a large dynamic change within the vocal recording which would cause the level to be turned up or down too much. The range controls allows the fader to move freely within level boundaries which will keep your vocals in control. The small black box at the bottom will display the dynamic range available from your settings in decibels.

Notice a small arrow between the range controls, this is the marker that decides the faders idle position, in other words it denotes where the fader sits whilst the fader is not performing any adjustments. Depending on the quality of the vocal recording, you may want to have it sit a little under zero to keep it ducked while nothing is present, I usually like to have it set between -3dB to -6dB for a minor level reduction when it is not present.

This is simply a visual representation of the adjustments which are being made to your vocal track, it shows a full 12dB of gain throw and there is also a gain indication shown at the bottom to make you aware of the precise levels throughout.

You can grab and move this fader while writing automation using your mouse if there is a part in particular you would like to manually handle, I do however rarely find myself doing this as the plugin works very efficiently by itself. Each to their own…

This is the final gain stage within the plugin, the output fader will allow you to make a final post automation gain change to tweak the overall level to sit exactly where you would like it.

Waves have also added a small clip LED to the top of this fader so that you can always ensure your vocals have not been boosted too much causing any unwanted distortion.

So you have got all of your settings exactly where you want them and are now ready to write the information into Pro Tools’ vocal rider automation lane, it could not be any easier. Unlike other plug-ins which perform a similar task, this one does not require you to set up any false peripherals, you simply need to select which automation mode you wish to work in, change the tracks automation mode to ‘Write’ and press play, the plug-in will do the rest for you…

OFF – Will ignore any written level automation data.

WRITE – Will write the fader movements to the plug-ins automation lane.

READ – Will read the fader movements of the plug-ins automation lane, this should be selected after you are happy with your vocals and wish to tweak the rest of your mix.

So there you have it, yet another method within Pro Tools to help you save even more time when working on productions you want to shape quickly. We hope you have gained a better understanding of this plug-in from the tutorial and if you would like to have try it out before purchasing you can download a demo from the Waves website here.

Any questions or comments? Please leave a comment below or tweet us on Twitter. We would love to hear how you have used this plug-in to aid your mixing; it’s a real game changer in my book!