In simple words, time based effects are signal processing units that add delay to the audio they are processing. So why not just call the article “Delay Effects in Pro Tools”? Quite simply, because most of the effects we will talk about are not perceived by the listener as delay but more as modulation.

In today’s realm of endless digital possibilities, delay seems like something quite basic but if we take a look back in the pre-digital era, adding delay to a sound was nothing short of an art in itself. The first audio engineers to use delay improvised complex systems using reel-to-reel magnetic tape machines. In order to control the time and the feedback of the delay effect, they used to shorten or add to tape loops, change the distance between the write and read heads, and often times they connected several machines together to create what we today call multi-tap delay.

Types of Time Based Effects in Pro Tools

Beyond the obvious use of delay to create another version of the original sound there are several other uses that, as stated above, are usually called modulation effects. I am sure you have heard about them before – chorus, phaser, flanger.

All these effects use delay to create the modulation of frequency content. How? By creating a slightly delayed copy of the original signal and the mixing together the two. This is the underlying principle of all modulation effects. What this does is called comb filtering. Because the two signals, the original and the delayed copy, are practically identical waveforms that are separated by a tiny amount of delay time, they form a new waveform when summed. A new waveform is formed because the delay creates a phase difference between the two signals.

To get your head around it, think about a simple continuous sine wave. If you copy that wave but nudge it to the right by half the period of the sine wave and then add it to the original signal you will get no sound if you try to play it back. 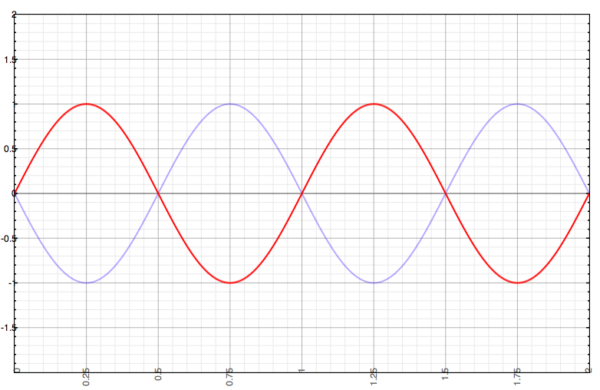 Why? Because the waves cancel each other out. The same thing happens with modulation effects but not so dramatically – and in a controlled manner dictated by the amount of delay time between the original and copied signal.

Time Based Effects in Pro Tools

Let’s take a look at all the native plugins in Pro Tools that lets us add time based effects:

This is an interesting delay unit that ducks the delay output behind the original signal. A good preset to use so that you understand how it works is the “Repeat Last Bar” option. Play a vocal phrase and whenever the phrase stops the delayed copied signal will play back, but only the last bar. Otherwise, it is a simple delay unit that can be synced to the session’s tempo so that you can choose time as note divisions rather than milliseconds. Beyond the standard delay, feedback and mix parameters you also get controls to modify the envelope that ducks the delay output, an eq and some imaging parameters that let you place the delay in the stereo field. 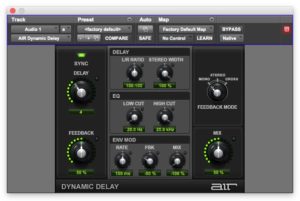 As the name suggests this is a multi-tap delay which means that it can divide the delay time in multiple smaller subdivisions or “taps” in order to create rhythmic delay effects. The parameters are pretty straightforward. The middle tap panel lets you set up 5 subdivisions of the original delay time and also allows for panning and levels of each individual tap. On the left there is delay, feedback and tap “routing” which allows for changing the order in which the “taps” are triggered. On the right,there is a mix control and a delay output equalizer. 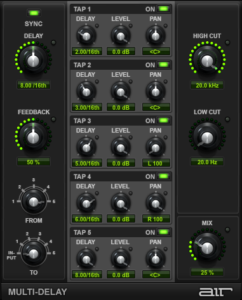 At its core this is a simple delay that you can sync to the session’s tempo and control it via delay time, feedback and mix parameters. On top of those, the unit has some other controls that are not so obvious to the user. The groove parameter sets how rigid to the grid the repetitions will be. Another interesting set of parameters are the rate and depth controls, which are more common to a chorus or phaser pedal. These control how much the delay time oscillates from the set amount. When using the mono/stereo version of the plugin, these parameters are great for creating awesome chorusing/ doubling effects. 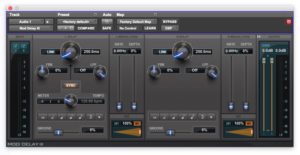 Well, this one is not a very creative plugin. You have only two controls: delay time in samples and gain. You probably won’t be using this delay creatively but it has one very useful application. Plug-ins like gates or some reverbs create delay in the audio track due to the heavy processing  that needs to be done and this time adjuster plug-in is perfect for adjusting the difference in time between the track that has processing delay and the other tracks.

The first modulation plug-in on the list is fairly simple. The depth parameter lets the user set the delay between the original and the copied signal and the rate controls the low frequency oscillator which modulates the delay time. In the chorus section, you can add pre delay and feedback to shape the sound of the chorus effect. In the LFO section you can choose the shape of the LFO as either sine wave or triangle wave (also known as saw tooth) and the phase relationship between the left and right information in degrees. The mix parameter sets the blend between dry and wet like on all other plugins. 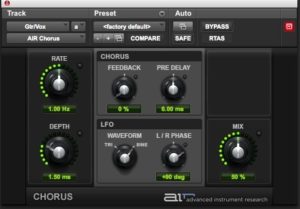 The plugin is pretty much identical to the AIR Chorus with one exception, the central panel. No more LFO and Chorus settings but instead you get a shimmer parameter and a delay time parameter. Delay time sets how much the depth oscillates and shimmer randomizes the delay time. On the side you also get a stereo width control to control how narrow the effect output is in the stereo field. 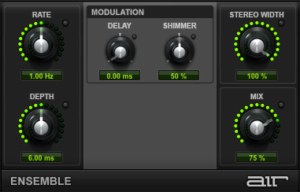 Again, this plugin is pretty much identical to the standard chorus with one exception – it creates multiple copies of the original signal that it then mixes together to create the chorus effect. The voices parameter lets you choose how many copies you want. All other parameters are the same to the AIR Chorus. 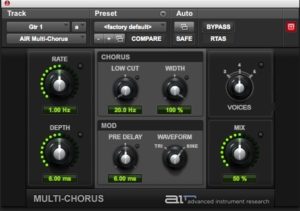 When sync is enabled, the rate control lets you select a rhythmic subdivision or multiple of the beat for the flanger modulation rate. When Sync is disabled, the Rate control lets you modify the modulation rate independently of the Pro Tools session tempo. Feedback, pre-delay, mix and LFO settings work just like on the Chorus unit. The re-trigger button resets the LFO phase. On the bottom panel you get an eq with a low cut and a phase invert button. 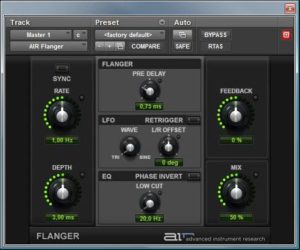 This last unit on our list is also pretty similar to the chorus unit with a lot of identical parameters – Rate, depth, mix, feedback, wave, L/R phase. The main difference is that it lets the user control how the frequency information is affected by the phasing. The phaser section provides control over the effect’s center frequency and number of phaser stages (or poles). The center control lets you change the frequency center (100 Hz to 10.0 kHz) for the phaser poles and the poles parameter lets you choose how many phaser stages to have. 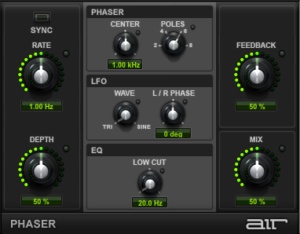 One important aspect to remember is the way you should use these native Pro Tools plugins for time-based effects: Never as an insert! – always in a send/return configuration. In order to do that just click on any free send on the track you’re working on and click on “new track…”; A menu will pop up letting you configure the auxiliary track. Name it, add it and then insert the time based effect you want to use on this aux track – and you’re good to go.