Funnily enough, the ‘Telephone’ effect makes the affected audio sound like it’s being played through a telephone! The effect can be created in a number of ways including playing a sound through a small bandwidth speaker and re-recording via a microphone – a technique more commonly known as ‘re-amping’.

The much easier way of doing it is by using an equaliser which comes pre-loaded with all DAW’s. With the effect being used more and more commonly in todays productions to create interesting breaks and tones, we will be teaching you how to create and apply the effect to your Pro Tools sessions with ease.

Here is what the Vocal recording we will be using for this tutorial sounds like without the telephone effect:

And here is the same Vocal recording with the telephone effect applied:

As mentioned the key effect to getting the ‘low-fi’ sound is an equaliser, the main aim of the plug-in is to cut down the spectral bandwidth of the recording.

We will be using the in-built 7-band equaliser which can be found from the plug-in menu EQ > EQ 3 7-Band (mono) as seen below. Note the 4-Band EQ doesn’t allow for full 24dB roll-off on high and low pass filters so it is important to use the 7-band EQ.

We first need to activate the high/low pass filters within the plug-in by clicking the circular ‘IN‘ buttons shown below, you will see straight away that small cuts are made at both ends of the equaliser.

The effect will benefit most from having a steep cut-off curve so that a very specific band of frequencies can be left at the end, therefore we will need to change the cut-off curve values of both filters from 6dB/oct to 24dB/oct. We now need to start cutting off frequencies by adjusting the frequency value for both filters, of course these settings should be adjusted to your tastes but a good starting point would be setting the high pass filter (HPF) to around 500Hz and the low pass filter (LPF) to the 2KHz area, the smaller the remaining band of frequencies left, the thinner the sound you will be left with. 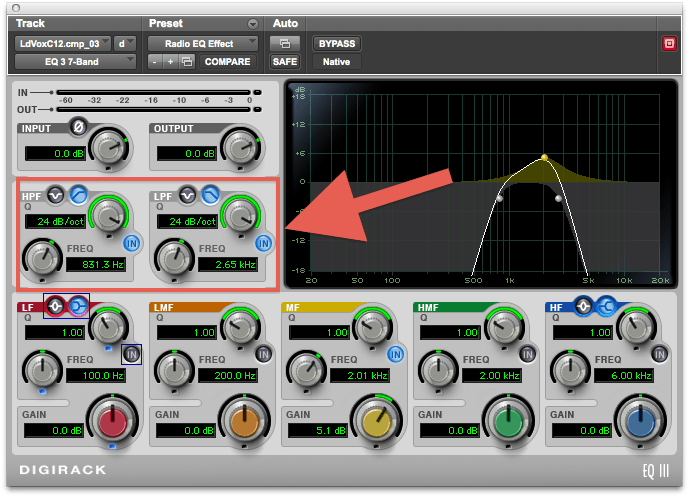 Here is a screenshot of the settings that were used on the audio example above. 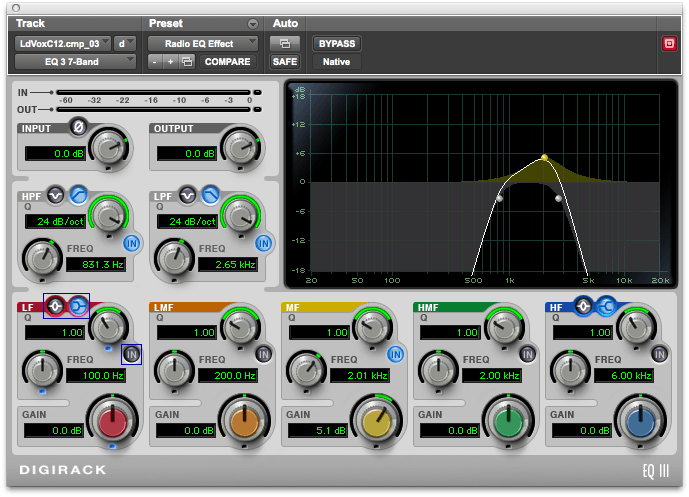 Applying the High/Low pass filters alone will give you a pretty good ‘low-fi’ sound by themselves but I also like to add a small boost at around 2KHz to give the sound a little more presence.

This effect is very much down to your own taste and essentially what sounds best within your mix but it can never hurt to also experiment in adding some distortion and compression as well as the equaliser to really get that telephone sound.

So there you have it, a very simple technique to create very different effects for your mix, just like most production techniques, the only real limit is your imagination! Don’t forget to keep us updated with your progress and any tutorial requests you have via Twitter or comments below.