With the release of Pro Tools 7 came a new feature known as ‘Region Grouping’, it’s pretty self-explanatory as to what it can do within your session, but this tutorial will show you how to work with the feature and when it may be particularly useful within your sessions.

The basic premise of the feature is that you can group various adjacent audio, MIDI, and Video (Pro Tools HD only) regions together and work with them together as almost a new single region, whether it be trimming, moving or duplicating.

Creating a region group could not be easier, simply highlight a number of adjacent regions which you wish two group from which you can either use the shortcut Command_Option_G (mac) Ctrl_Alt_G (windows) or by navigating to the region menu and choosing ‘Group Region’.

You will notice that the regions you have selected will merge together into a single workable region. It is also worth mentioning that these groups can be returned to their original split regions when needed as well, we will discuss this a little later.

Quick Tip: A Region Group will be added to the region list on the right of the Edit Screen as soon as it is created. 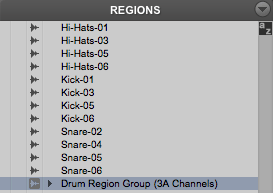 Making Use of Region Groups

The potential benefits of region grouping range from broad edits to session arrangement. As stated earlier, the new region group will be accessible from the region list which means that you could precisely pull hunderds of arranged regions into your mix within a matter of seconds.

You might have a multi-track drum recording which you wish to loop over a period of time, instead of the usual process of having to highlight a number of regions and then duplicating them, with region groups you can create and then highlight your ‘drum loop’ region group and duplicate that instead. 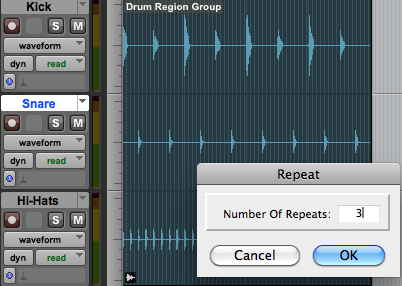 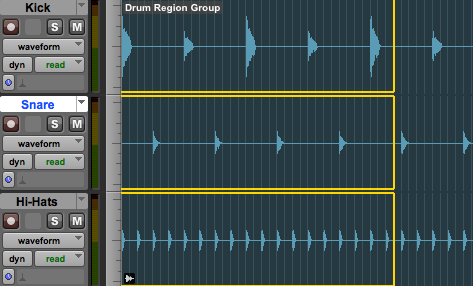 Hopefully by now you are starting to see this features potential within your sessions, I personally find myself using it frequently with session arrangement. I will usually create a group including all of the instruments and regions of the chorus for example and then perform the same for the other sections, this leaves me the option to very simply arrange the sections of my song how I please, and most importantly in a short amount of time.

And of course let’s not forget that this process is completely reversible, after creating a region group you can very easily bring back the individual regions once again.

To ungroup a Region Group, simply highlight the group you wish to split again and either use the shortcut Command_Option_U (mac) Ctrl_Alt_U (windows) or by navigating to Region > Ungroup.

You may also notice that there is the option available on on the Region menu to Ungroup All, as you will probably imagine, this will ungroup every Region Group within your session should you wish.

So we hope you have enjoyed another tutorial on a feature which is very often overlooked within big sessions, and why not try combining this feature with track grouping to control vast amounts of regions with even more precision, you can read up on Track Grouping HERE.

If you’re running PT10, replace the word ‘region’ with ‘clip’ – we’re too lazy to keep up with the lingo..!