PCIe also knows as PCI express is the nowadays standard that replaced older standards such as PCI, PCI-X or AGP. Contrary to an external audio interface a PCIe audio interface connects directly to the motherboard if the motherboard has PCIe slots on it – thus in order to mount of these on your computer you need a physical slot to insert it in.

PCIe audio interfaces come in all shapes and sizes with a lot of different purposes and designs so it would be hard to designate products that are among the best on the market as they are usually specifically targeted to do a certain thing and you rarely come across two products that do the same thing.

AES/EBU is one of the most common transmission protocols used to transmit digital audio. The cable looks like a regular mic cable, but with the added spec of having 110 Ω (ohms) impedance. A single AES/EBU connection can transmit a two channel digital signal with a maximum sample rate of 192 kHz and bit depth 24 bit.

This connection type can take the form of either RCA coaxial or fiber optic TOSLINK terminated cable. This can carry a two-channel PCM (pulse code modulation) signal, or a data-compressed multi-channel signal, such as DTS or Dolby Digital.

This transmission protocol can carry up to eight channels at a sample rate of 48 kHz and bit depth 24 bit or if using the SMUX protocol, it can carry a higher sample rate signal, of 96 kHz but the channel number reduces to only four. 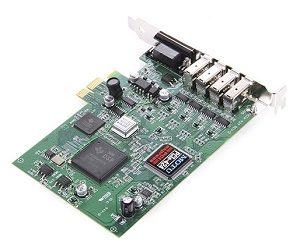 This transmission protocol allows for up to 64 simultaneous channels of up to 24-bit/48 kHz resolution signal (or 32 channels at 96 kHz) to be transmitted via a single cable, either BNC or dual fiber optic.

We all know about this one – both USB 2.0 and 3.0 are high speed digital connections that even though originally designed to connect computer peripherals, work excellently to transmit digital audio.

Apple’s competitor to the USB, the FireWire protocol is also a high speed digital connection initially intended for interconnection of peripherals which also works great with digital audio.

This protocol was developed by Intel and Apple and it is the speediest connection type with transfer speeds of up to 20 GB/s.

Do not expect to find to many PCIe cards, if any, with XLR or line connections but instead one, or more of the above mentioned digital transmission protocols, the most common being ADAT, AES/EBU, FireWire and MADI.

As I previously mentioned, there are a lot of different types of PCIe audio interfaces out there. Let’s take a look at some of the very popular options of cards used to centralize the signals of a digital or hybrid studio: 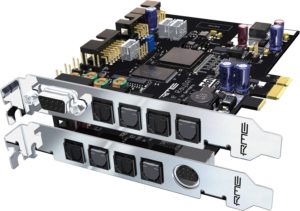 Click here to see reviews and prices for the RME HDSPe RayDat audio interface on Amazon.com

This audio interface provides the user with 36 channels of inputs and outputs in multiple formats that can be cobined together – it has 4 ADAT i/o, one AES/EBU I/O and on S/PDIF I/O – all going up to 192 kHz sample rate. Appart from these digital audio transmission protocols it also has 2 MIDI I/O for sending MIDI signals to and from the board. This interface has 1 MADI I/O, simple and efficient. It can transmit up to 64 simultaneous channels of digital audio at 24 bit, 48 kHz. This is an excellent audio interface to use in conjunction with a MADI equipped digital console or some sort of I/O device such as the SSL Alpha-Link MADI SX. 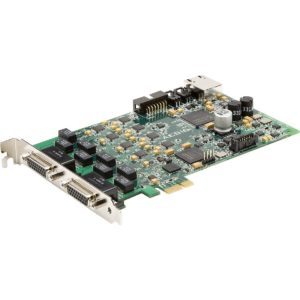 Click here to see reviews and prices for the Lynx AES16e audio interface on Amazon.com 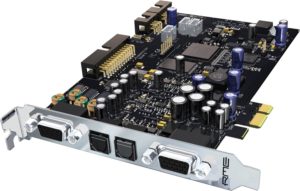 Click here to see reviews and prices for the RME HDSPe AIO audio interface on Amazon.com

A simpler version of the HDSPe RayDat, the AIO features 38-channels of 24-bit/192kHz digital audio over AES/EBU, S/PDIF and ADAT. Practically, to get 38 channels you have to use 18 inputs and 20 outputs – this is the only configuration to get the maximum number of channels out of the interface.

PCIe audio interfaces are great for getting rid of the hassle of carefully routing tens of cables around your studio and at the same time they provide fantastic quality as all of them provide the user with the possibility of converting any incoming signal at at least 96 kHz/ 24 bit.

Even though PCIe is sleek and efficient in the studio, it is still a new technology and there aren’t as many options as if you are buying an external audio interface- on the contrary, there are very few products that are not specialized to use with another piece of hardware – so you might have to wait a while to get the extensive possibility of choice as in the case of external audio interfaces.