Some tasks can take a long time if you are clicking here there and everywhere, but there are a few neat tricks you can use to speed up some of the processes in the mix window.

Copying Inserts/Sends to another track

How: Hold down Option (mac) Alt (windows) and click&drag the insert/send to another track

Why: Useful for when you need to use exactly the same settings on another channel, or if you want to use settings as a starting point.

Why: Even pro’s add inserts on the wrong track from time to time

Why: When you are recording, mixing or editing anything that saves mouse-clicks is essential! Time is money!

How: The same principle as above, except use:

How: As above except:

Quick Tip: The same finger-bending modifier keys as above can be used when soloing, muting, record-enabling, Input-monitoring (HD only) and using solo safe…

Why: These shortcuts are great when setting up a session’s routing. Setting inputs in ascending order is great when gearing up to record live drums.

Why: You can route tracks to multiple outputs for use with headphone mixes, monitor feeds or other parallel mix scenarios. 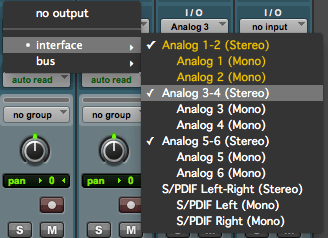 How: Command_Click (mac) Control_Click (windows) on a send assignment letter

Why: A great tool when you are using sends for a headphone mix.

The finger-yoga style shortcuts described above will hopefully become a valuable asset in your mixing bag of tricks. Do let us know if you liked the tutorial by leaving a comment below or on Twitter.