Gated reverb was used a lot in the 80’s and is a sort of signature of Phil Collins’ drum production; but that doesn’t mean it is an out of date technique! When used in an extreme manner it produces a distinct Collins-esque sound, however if applied more subtly it can allow you to use reverb without clouding your mix – this can be very important in high track-count mixes.

Since gated reverb is most commonly associated with big sounding snare drums, (although please do try it on vocals and other instruments for interesting effects) I thought I would go down that route for this tutorial.

Let’s start by listening to the effect we will be producing.

This is the snare sample we will be using without any processing applied:

And this is what the same snare will sound like after applying a gated reverb:

For this tutorial I called up one of my pre-recorded snare drum samples; it’s completely unprocessed (no compression or EQ).

I looped the region four times using shortcut Command_Option_L (mac) Control_Alt_L (windows). When region looping, you are presented with a variety of options including crossfade and the rather useful ‘loop until’ function.

Quick Tip: For other applications when you don’t want to loop a region, you could use the ‘repeat’ function which is accessed via the edit menu or Option_R (mac) Alt_R (windows). Unlike looping you don’t get the extra settings; it simply duplicates the region however many times you need.

In addition to the audio track we will need an aux track which will host the reverb and the gate.

Setting up the Reverb

I chose to use the D-Verb plug-in because it’s easy to setup and comes packed with Pro Tools. I opted for a medium size plate reverb and adjusted the pre-delay so the initial transient of the drum wasn’t spoiled with too much reverb (pre-delay is the delay before the effect kicks in and is useful when you want to retain some natural sound of the instrument, or in this case the ‘crack’ of the snare). 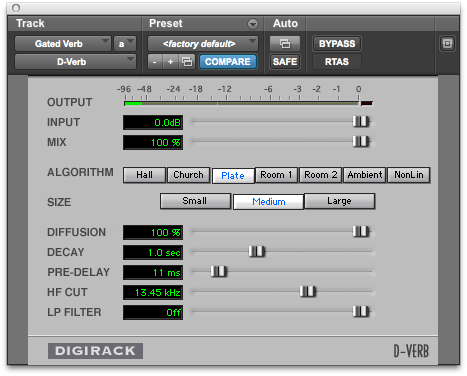 At this stage, if you play back the loop you should hear the snare washed with plenty of reverb.

Setting up the Gate

You will notice that the plug-in is called ‘Gate/Expander’, gating silences signals that fall below a specified threshold whereas expansion decreases the gain of the signal as the level drops below the threshold. To enable gating, which we most certainly do as we want the reverb effect to be silenced not just ‘turned-down’, we should set the Ratio and Range controls to their maximum levels.

Quick Tip: Gates are often used when mixing live audio and for separating instruments such as drums; for these applications you should opt for a more gentle reduction in level than we are using here as unnatural pumping or abrupt silencing could potentially ruin a mix. 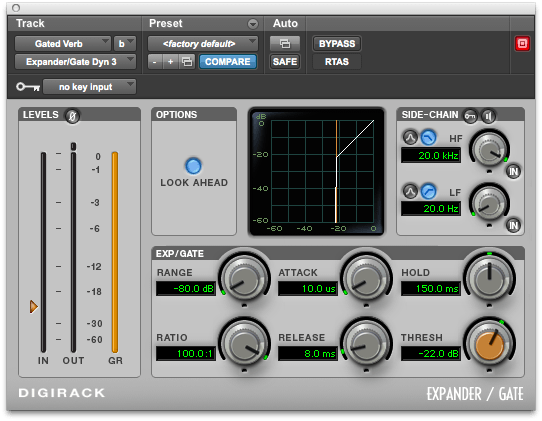 Attack: This defines how quickly you want the gate to react to the signal dropping below the threshold; I have chosen a very fast response as for this instance we don’t need a delay.

Release: This defines how quickly the gate will close, 5ms is the fastest however I have gone for 8ms as I found 5ms a little too quick on this particular drum sound.

Hold: This controls how long the gate will stay open for, for a decent length gated reverb sound you should opt for somewhere between 120-160ms. Any shorter and it will sound awkward however do experiment with longer hold times as you can achieve great effects.

Threshold: This is the level at which the gate will kick-in – you should experiment with this setting until you find the point where you want the reverb to stop.

I hope you enjoyed this tutorial, gated reverb will certainly add something new and different to your repertoire of production tricks. I personally feel that the big snare sound will come back into fashion sometime soon but please do try it with more subtle expansion settings (ratio and range) and I’m sure you will be pleasantly surprised with its versatility.