Many things offered from the digital realm of sound production are taken for granted, most of all the ability to revert backwards when you have made a mistake. I’m sure even people who still favour towards analogue mixing can appreciate just how useful the undo function is when it comes to recording, editing, and mixing.

Most people are no doubt familiar with the feature, even if from using their word processing software, thankfully Pro Tools offers a number of different undo features which make covering your mistakes as simple as hitting a shortcut, even those you made a little while back.

Pro Tools has the ability to remember up to 32 of the last ‘undoable’ operations you have performed, this means that you can revert back through one of these operations at the click of a button, if you had of tried telling an engineer that back in the days of tape editing they would have told you to go fish…digital isn’t all bad then?

Each of the undoable operations are stored in a list within Pro Tools known as the ‘Undo History‘ window, a little more on this later on, but we will mention here that as you apply the undo command the most recent operation will be undone, then the most recent before that and so on…

We stated that Pro Tools can store up to 32 of your most recent operations, but you can set this to a lower amount should you wish within the Editing tab of your Preferences window, as shown below. 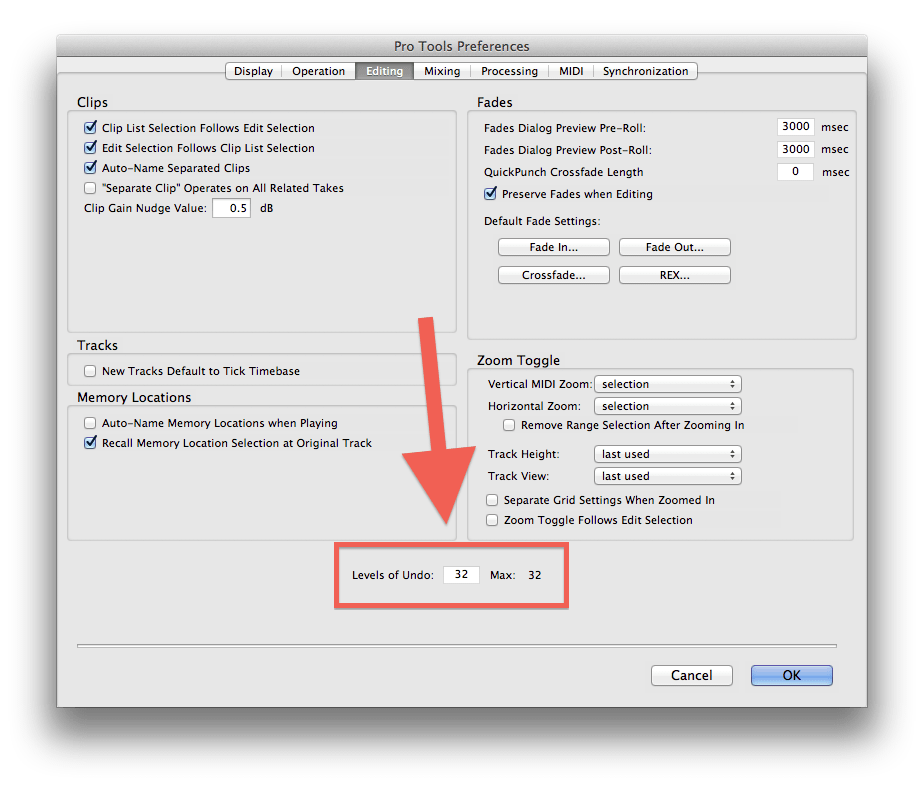 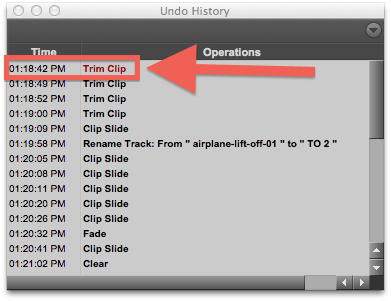 You are no doubt familiar with the shortcuts already but we will cover them quickly before delving into the menu options that Pro Tools offers.

To undo your most recent operation you can use the shortcut Command_Z (Mac) or Control_Z (Windows).

You can also perform the same task from Edit > Undo as can be seen below. 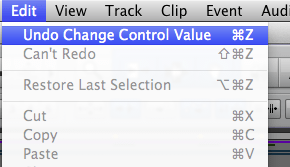 Quick Tip: If no ‘undoable’ operations are available, the menu will display ‘Can’t Undo’.

If you have undone an operation and then wish to redo it once again you can either use the shortcut Shift_Command_Z (Mac), Shift_Control_Z (Windows) or simply head to Edit > Redo.

Quick Tip: Just like the undo command, if no ‘redoable’ operations are available, the menu will display ‘Can’t Redo’.

Now that we have a grasp on what Pro Tools is capable of in terms of storage, let’s look a little closer at the undo history window which will give you a much clearer view on the operations you have performed, along with a quicker way of finding which operations you wish to revert on.

The history window can be shown (or hidden) from the Window > Undo History.

As we discussed, this window simply lists the undoable and redoable processes and allows you to return back to one of those previous states. 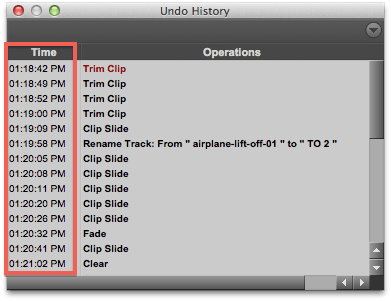 You will also notice that each of the listed operations also show a Time value as well which defines the creation time, particularly handy when you wish to return your session back to how it was five minutes ago for example, providing of course that you have remained within the preference limits we discussed earlier. You can decide whether these are displayed by choosing from the options dropdown menu, as shown below. 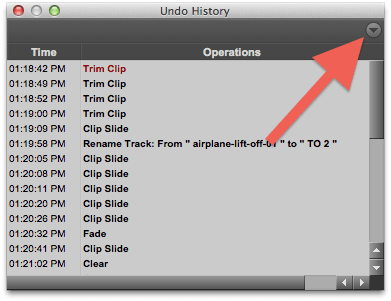 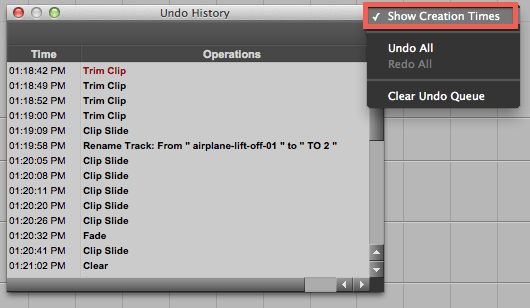 We quickly referenced the dropdown options menu earlier on to show or hide the creation times, this same options menu can also be used to ‘Undo All’ or ‘Redo All’ as well although there will probably be few occasions when you need to resort to this process.

You may also have noticed the option to ‘Clear Undo Queue’ this will of course wipe the list clean and you will no longer be able to change these processes, I usually find it best to leave the list as it is as opposed to clearing it, it is true that these processes will be deleted as I reach and pass my setup undo number limit, however by this point I probably won’t intend on heading back to them anyway, the option is there if you need it.

Quick tip: Processes from the undo queue will also be removed should you delete a track and clear a clip from the clip list.

So if the whole idea of Pro Tools storing processes is to ensure you can revert back on a mistake, why have we spoken about clearing the list and limiting the number of undo’s available? Well as with most computer storage processes, there are consequences for having this luxury…

When Pro Tools remembers an undoable process it is remembering a fair amount of information including the time, which track, which clip, and so on…so when you have 32 of these, a fair amount of your computers RAM (Random Access Memory) can be used which may cause other elements of your system to struggle, such as running plug-ins or virtual instruments.

This is the reason why Pro Tools offers so many options, this way you can hold a steady balance between how much processing is used between your undo list as well as your other processes.

We hope that you have found this tutorial useful. While the process of going through and spending time checking how your system is storing undoable commands may seem long and unimportant, the benefits it can have on your system’s performance can be quite surprising, so it is worth doing.

If you have enjoyed this tutorial then please do leave us a comment below or say hello on Twitter!