Compression and equalisation are probably the two most common effects used in any production, but what does a compressor actually do? This tutorial will introduce how compression works and how to approach each control.

The aim when compressing audio is to reduce the dynamic range by lowering the level of the loudest parts, therefore creating a more balanced sound. Compression is not to be confused with ‘fader riding’ or level automation, yes compression does control dynamics but it can also add sonic qualities as well.

Careful compression can produce a definitive and well balanced consistent mix, poor compression can cause mixes to sound weaker then they did before causing slurring and imbalance. 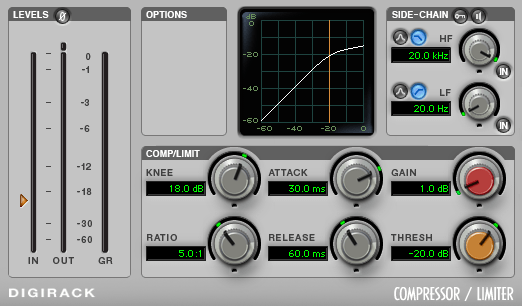 Threshold : This highly important setting (in dB) determines the level at which the compression reduction kicks in. For example a threshold setting of -6dB would mean that any signal above this level would be compressed.

Decay : Decay is the time taken (in milliseconds) for the reduction in level to return after dropping below the threshold once more. A slow decay can be used to give a sense of additional sustain to a signal, while a quick delay can create punchy and fast hitting sounds.

Gain : This is the volume adjustment made to the signal following compression, generally referred to as ‘make-up gain’ as it is commonly used to bring the entire signal back up after reducing the louder elements, therefore increasing the gain of the entire, more balanced signal.

Compression does not really have any rules, there are of course good starting points for different instruments, but just like most other mixing techniques it comes down to the engineers taste, and more importantly what the mix requires. Some mixes require a snappy kick drum for example while other styles may benefit from a slow sustained kick for the bass to sound more defined.

With newer features including ‘key inputs’ or ‘sidechains’, compression can now be used in lots of different way to create vastly different sounding mixes. Hopefully you now understand the basics and are ready to dive right in bringing a whole new sound to your mixes!